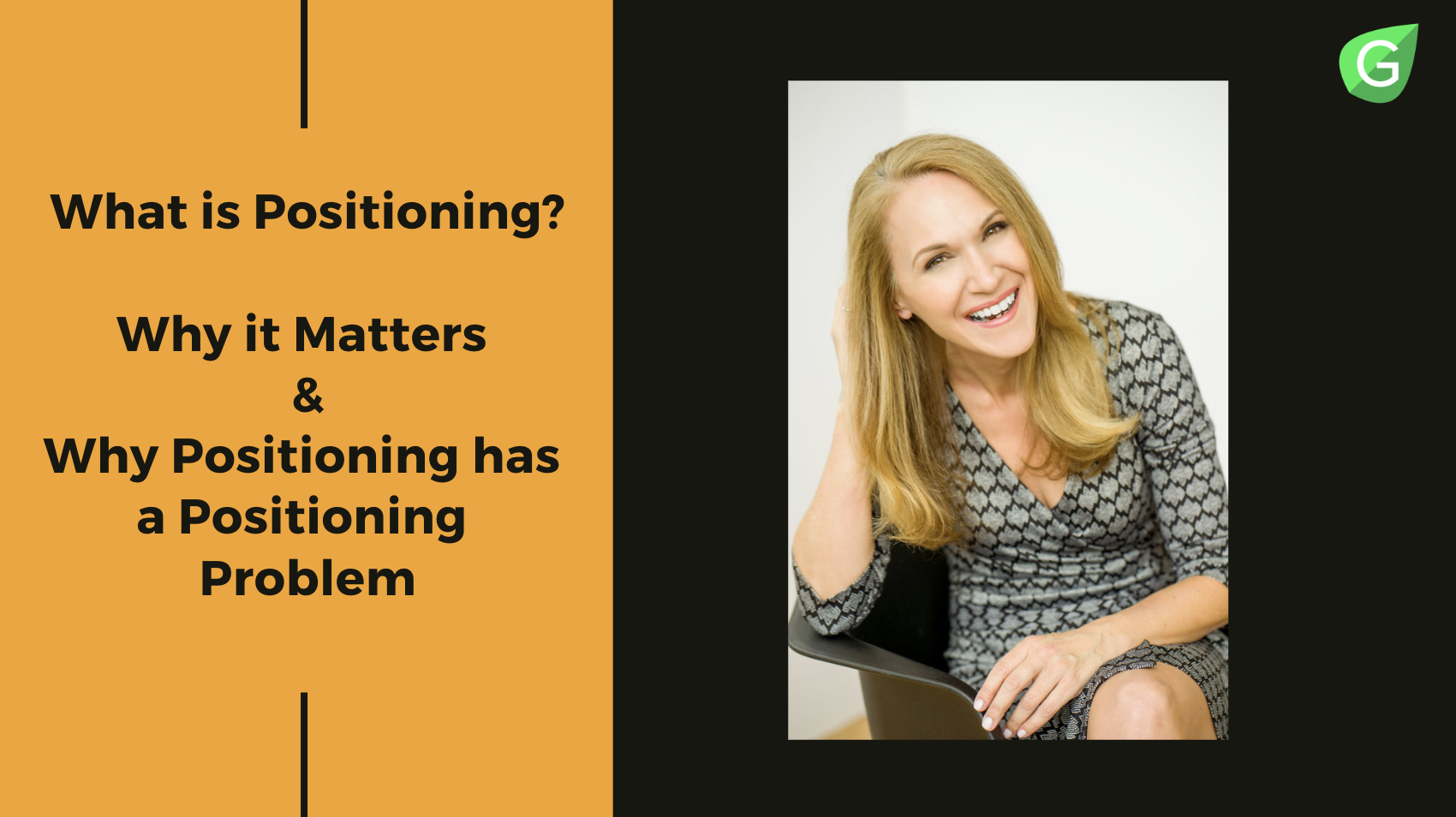 The concept of positioning has been around since the 80s but not everyone fully grasps it. It is not the same thing as branding or messaging. And it certainly isn't equivalent to marketing.

If a marketer is asked to market apples, the first thing they will do is to market it as the best possible apple it can be.
‍
Positioning, on the other hand, is about saying, maybe it's an apple, maybe it's a delicious apple, maybe it's lunch or maybe it's something else. The decision of how you're going to position your offering is a strategic one - you have to make some decisions about what market you are going to win and why.

According to April Dunford, founder of Ambient Strategy and a positioning expert, positioning is really about defining what you are and why that is important to a particular segment of customers.

April has held executive positions at both smaller and larger B2B companies, has launched a dozen products into market and has driven hundreds of millions of dollars of revenue growth. We sat down with her to dispel the myths about what positioning is, why it matters and a step by step guide to doing it properly.

“Marketing is polishing a turd and positioning is turning that turd into a fertilizer.” - April Dunford

What is the biggest positioning myth you would like to dispel?

April: Most folks just don't position at all. They kind of have an idea that positioning is a thing, but they don't tend to actually consciously do it.
‍
A lot of people were taught how to do positioning by writing a positioning statement, which is a fill in the blanks exercise. It says we are a blank and the blank is the market category for blank. And then you say who your target customers are that delivers blank. And you talk about the value.
‍
The statement itself is frankly bullshit. The act of writing down a statement doesn't tell you how to get to the blanks and it's the blanks that are super important.

What are the core components of positioning?

April: If I broke out the components of a position, the first one would be who are my competitive alternatives. If I looked at my best customers, my happiest customers, who do they compare me to?

If my solution didn't exist, what would they do?
‍
That might be a spreadsheet. It might be hiring an intern or it might be using another bit of software. And then if I look at it in the context of these as the comparables, what do I have that those comparables don't have? What do I have over a spreadsheet? You might think your product is easy to use, but spreadsheets are really easy to use!
‍
So maybe easy to use isn't your real differentiator. So you think about the features you've got and how those features translate into value for customers. So you might say, "Oh, I've got a 25 megapixel camera." The benefit to customers is that the images look really sharp even if I zoom in and that is the value of your product. And then you say, okay, well this is the value we deliver. Of all the customers on the planet that might want to buy our stuff, not everybody cares about that value the same way.
‍
In the last stage you're doing this segmentation and assessment that says these are the people that care a lot about this value.

This is super important if you are a startup with limited marketing and sales resources. You could go sell to everybody but what you really want to do is to spend your time with the folks that are most likely to buy, will buy quickly and intuitively understand what you do.

Finally you get to the point where you say, okay, this is what we do. These are the people that really, really care about our offering. The last piece of it is to express that in a context that makes your value obvious to the people that care.

April: A position doesn't last forever, it is a living thing that is constantly evolving and it is one of the hardest things about positioning. You might have a beautiful positioning that works right now, but the boundaries of the market are constantly shifting - new competitors enter the market, some shift out of the marketing.

We have global trends we need to keep on top of and these stretch the market in different directions.
‍
You may have a positioning that works really well with your customers at a particular point in time but then something happens in your market that shifts the way that people think about the market across the board, in which case you need to revisit your positioning.

Is there a prescribed period that positioning will work for or does it really depend on the market?

‍
April: It depends on the market. You have to be aware of things that have the potential to disrupt the way people think about the market and when these disruptive things happen, you need to go back and check in on your positioning.

GDPR is a good example. There's a change in industry regulation that shifts everyone's priorities. Or it may shift your buyer’s priorities. It may have to shift your positioning.

Another example would be if you have a big new competitor that gets into the market that wasn't previously there and that competitor changes the way that people think about the market.

A third one might be a big bang change in technological capability. You see this in things that operate wirelessly. There are things we can do on a 4G network that were just not possible when it was 3G and so that changed the way we thought about the market - it changed the boundaries of what we thought was possible.
‍
When big things like this are happening, you have to be on the watch for them. And then when they come you have to check in and say, “does this positioning still work?” Is there a chance that maybe it needs to shift? And you need to be constantly on the lookout for things that might actually impact your position. I've had positions that, we positioned it one way and it lasted for a decade. I have other ones that we did positioning for, and it was really great. It lasted about six or eight months and then a giant competitor moved into our space and we had to throw all the cards up in the air and start over again.
‍

You recently did positioning for the City of Toronto, can you walk us through it?

April:
This was an interesting one because normally I work with tech companies. But we got approached by someone in the mayor's office that said, “hey, you know, I don't think we do a good job of positioning the City of Toronto as a tech hub. Would you like to do a project where we do that?”

The goal was to basically help the mayor do a better job of positioning tech in Toronto. I thought this was a worthwhile project to do. And I brought in Ria from GrowthGenius to help me. And we kind of went through exactly the steps that I outlined earlier.
‍
The first thing we looked at was what were the actual competitive comparables.

We put together a long list of entrepreneurs, called them up on the phone and we asked them, “did you ever consider doing it somewhere else (i.e. expanding or starting your business)? And if so, where?”

The responses we got were really interesting. One of the most fascinating realizations was that we don't really compete with the Valley. I think people that want to go to the Valley, just go to the Valley. But if for whatever reason you deselect the Valley, then our actual competition is other big tech hubs in North America that are not the Valley. And those are New York, Boston, and to a certain extent Chicago and London.
‍
So then we said, “okay, so what do we have that our competitors don't have?” What have we got that the other guys don't? And we pulled a bunch of data from different sources to look at how big the Tech Community is in Toronto. How fast is it growing? How much investment is there? How many scaling tech companies do we have? And what we found out from that was that number one we're quite large in terms of the number of tech jobs we create. We rank up there with New York, Boston, etc. We're bigger than Boston, we're bigger than Seattle and we're bigger than a lot of places that you would think were smaller than us in terms of tech.

Secondly, our growth rate is way higher. We're actually growing at twice the rate of the new jobs added in the Valley and New York combined. I thought that was a remarkable statistic.

Secondly, our growth rate is way higher. We're actually growing at twice the rate of the new jobs added in the Valley and New York combined. I thought that was a remarkable statistic.

If you are thinking about starting a company or you are senior talent who is thinking about moving to Toronto to join a company, what's the value we sell you on? And it's really about joining a community that's very big - there are lots of jobs, lots of potential employees and a deep talent pool here.

Number two, it's growing really quickly. You have the opportunity to get in while things are hot and building and expanding. We're not the size of the Valley yet, but we're getting very big, very quickly. Lastly, there was a little bit of like, “yeah, Toronto is a pretty good place to live.” There's certainly worse places you could live and there's this high quality of life aspect to it. But that was kind of a distant third.
‍
We put all of these findings together with a strong context. Up until then, we were positioning Toronto, as a bit of scrappy, up and coming, trying to be cool place but after we looked at the data, what we got was we’re already big, we are already growing quickly and we’re already cool. We just need to actually educate people on how big and interesting and exciting it is already.

Thank you so much April for joining us! This has been really informative. Where can our readers find you?

‍
April: On April Dunford on most social media platforms. I'm somewhat active on Twitter. I also blog on medium and I have a couple of publications that I blog for.

Listen to our podcast with April Dunford here.

Interested in learning more about how you can bring your prospecting game to the next level? Contact us today!

Share this article



Sign up for our newsletter
Thank you! Your submission has been received!
Oops! Something went wrong while submitting the form.